Several works by Roberta Gonzalez are currently on display in Vézelay in the exhibition “Hans Hartung: the war years” at the Zervos Museum, organized in partnership with the Fondation Hartung-Bergman.

The exhibition retraces the German painter’s work during the period surrounding the Second World War. During this time, Hartung was married to Roberta Gonzalez, Julio Gonzalez’s only child, who was herself an artist. Starting in 1937, when Hartung introduces himself to Gonzalez as an admirer of his work, he begins to frequent the Gonzalez studio. This contact with the Gonzalez family leads to his mariage with Roberta in July 1939, just weeks before the beginning of the Second World War.

Considered a traiter by the Germans, and suspicious by the French, Hartung is forced into hiding. He and the Gonzalez family take up residence in the Lot. When the Germans invade the South of France, he is forced to flee again, this time to Spain, where he is imprisoned. He eventually manages to reach North Africa, where he joins the Foreign legion and is sent back to the battlefield in France. His wound in the battle of Belfort leads to the amputation of his leg.

The exhibition retraces his artistic creation over the course of these “dark years”, spent largely with the Gonzalez family. In spite of the danger and lack of materials, Hartung, Roberta and Julio all pursue their artistic work. Though Hartung’s wartime creation shows continuity with his abstract work from the 30s, the figurative heads and “Gonzaloid” motifs attest to the influence of his father-in-law.

Hartung’s work impacts in turn that of Roberta, his wife. According to Roberta, Hans’s work exposes her to new artistic horizons. During the war, she paints and draws many portraits of her aunts and her father, as well as female subjects in pain, supplication or anguish, oscillating between a realistic and an avant-gardist aesthetic that deforms her subjects. In the Postwar period, she introduces wide, expressive brushwork to render areas of pure color in her works. However, she maintains figurative symbols in this otherwise abstract backdrop, emblematic of her husband’s work. Over time, she develops an increasingly colorful, dynamic and personal style in between figuration and abstraction

The presence of this exhibition in the Zervos Museum attests to the support that Christian Zervos, famous galerist and art critic, provides to the German painter over these years.

Roberta Gonzalez’s paintings and drawings on display at Vézelay correspond to an introspective phase in her work, mainly at the beginning of the 1950s. Dominated by pensive female figures, these works attest to Roberta’s attempts to integrate pure color into her previously somber palate used in the war years. 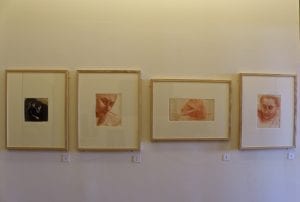