Longtime friends and colleagues, Julio Gonzalez and Pablo Picasso participate together in the Spanish Pavilion in the 1937 World’s Fair in Paris.  Both artists take advantage of the occasion to manifest their support for democratic Spain and their fellow Spaniards under attack. Picasso does so with his monumental mural painting, “Guernica”, and his satirical etching, “Dream and lies of Franco”. Gonzalez presents “La Montserrat”, an iron sculpture of a Catalan peasant woman, brandishing a sickle in one hand, and her child in the other. Over the next few tumultuous years, Gonzalez retains “La Montserrat” as a favored motif both in drawing and sculpture to express his support and then his anxiety about the triumph of fascism in Spain then throughout Europe. While the “Montserrat” displayed in 1937 is a courageous and resilient incarnation of the Spanish people’s resistance to fascism, she becomes desperate, imploring the heavens and crying in pain. “Masque Montserrat criant (Mask of screaming Montserrat)” (1938) is displayed in this exhibition about Picasso’s politically-engaged artistic creation as a testimony to Gonzalez’s shared political and aesthetic concerns, triggered by the Spanish Civil War. 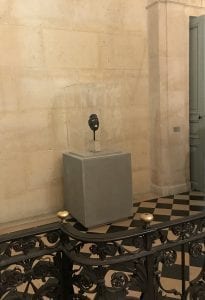 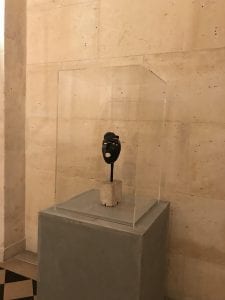 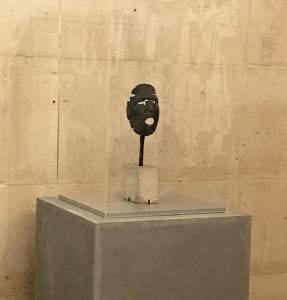